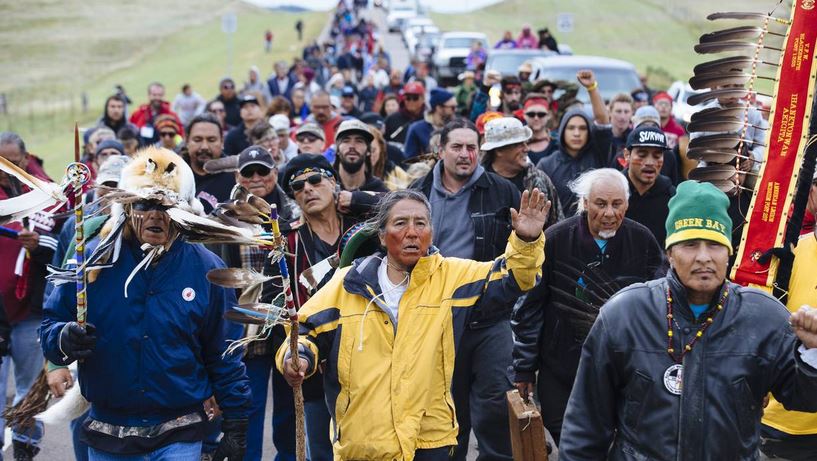 1. It’s an accident waiting to happen

When researching oil pipeline accidents in America since the year 2000, the question quickly went from “are these common?” to “why are these so common?” Oil pipelines are incredibly prone to accidents, so much so that listing these accidents would take up pages of text. Pipelines can rupture in countless ways and destroy land, water, vegetation, wildlife, and any real estate. Once a pipeline ruptures, little can be done to repair it and even less can be done to fully clean the extreme amount of toxic waste. While the DAPL website claims that the pipeline will be inspected 24 hours a day, 365 days a year, this is nearly impossible and if we’ve learned anything from the hundreds of previous pipeline accidents, constant monitoring of a pipeline is an empty promise. An upsetting statistic: Over 500,000 gallons of crude oil or gasoline has accidentally spilled onto land or water in America in 2016 alone. So…

Building the Black Snake pipeline will cost approximately $3.78 billion, $2.5 billion of which was provided by bank loans. Banks that once, twice… okay, numerous times… have played around with citizens’ money. This money could be put towards clean energy solutions, environmental clean-up, pollution prevention, or green jobs, but instead was put towards the building of a one-thousand-mile nightmare. Which banks involved? Oh, man. Great question…

3. The banks involved are bad They’re really bad. Not the Javert from Les Mis kind of bad, where we can feel sympathy and see a unique, damaged point of view. Nope. This is the Gaston from Beauty and the Beast kind of bad. The next time your Trump-supporting or anti-big bank uncle goes off about corporate greed or bank bailouts, remind him that Citibank, Wells Fargo, and SunTrust are just three of at least eleven banks funding and ultimately profiting off of the DAPL. In the bank bailout, Citibank alone was given $476 billion from TARP, the FDIC, and the Federal Reserve. Here they are once again profiting off the American people by investing in a pipeline that does more harm to regular citizens than good. In fact, banks will profit over 400% more than any citizens in the building of this pipeline.

4. It won’t boost the economy

For those arguing that the pipeline will boost the economy and create bountiful jobs, think again. Pipelines do not have any major economic impact, except when they’re being built. Sure, rural areas in the Dakotas, Illinois, and Iowa have seen some spikes in hotel bookings, campground reservations, and recreation areas where the pipeline is being constructed, but these are soon to vanish, as the pipeline is 85% complete. The DAPL is estimated to have created between 8,000 and 12,000 jobs, but to keep only 40 permanent jobs. Yeah, 40. Annual tax revenues of around $55 million will kick in to the four states mentioned, but split between all four of them, even these are rather dismal. To put that money in perspective, Colorado on its own generates $20 million a month in marijuana taxes and fees. A month. For weed. All in all, pipelines go economically unnoticed until they burst or spill.

5. Dependency on crude oil is not sustainable

As much as America wants to be energy independent from foreign countries — and the DAPL will help with that, though not solve it — dependency on oil itself is a major issue. By creating these pipelines, the US is further spinning the narrative that fossil fuels are reliable sources of long-term energy. They are not. The extraction of fossil fuels is laborious, environmentally damaging, and incredibly dangerous. The use of fossil fuels is absolutely limited, and the US needs to transition to an alternate, and more efficient, means of energy.

6. It’s a political conflict of interest 7. It does not benefit the landowners

Let me take you back to the year 2000, when Julia Roberts slapped on a mini-skirt and cheetah-printed blouse to star in a dramatization of the true story of single-mom Erin Brockovich, who took on energy company PG&E in an unprecedented lawsuit regarding the ill residents of Hinkley, California. PG&E tried to purchase land, or simply pay off, residents of Hinkley without telling them that the groundwater had been completely contaminated by carcinogenic hexavalent chromium, explaining their terminal health conditions. You still with me? Good. Landowners in these four states who have been paid off, but are keeping their land, are worried about what this pipeline can do to their soil and water. Farmers in Granville, Iowa have already complained about their once fertile soil now being packed with layers of hard clay and loan. Whether soil will be completely infertile or polluted due to physical and chemical changes is worrisome, and whether people will become ill due to this is a major concern. This takes us to the next point, which explains which landowners are in the most imminent danger…

Let’s back up further for a moment and discuss the Trail of Tears, which has been erased from countless non-Howard Zinn history books. In summation, the Indian Removal Act of 1830 forced Native Americans to vacate their ancestral homelands in the Southeastern United States and be militantly marched on a trail west of the Mississippi, where thousands from the Cherokee, Muscogee, Seminole, Chickasaw, and Choctaw tribes perished from hunger, disease, or military violence. Most didn’t even get to gather their belongings first, resulting in white Americans looting their things or destroying their beloved artifacts. Keep in mind this is the short version. The long version includes murdering hundreds of thousands of Native Americans during early colonization of North America, and heartlessly claiming the land in the name of foreign monarchies. Fast forward to now, where after many laws protecting Native American land and cultural artifacts have been enacted, the DAPL began construction without properly consulting the Sioux Tribe, whose water supply under the pipeline is in direct danger of contamination. The Sioux Tribe also claims that the DAPL is being built over sacred burial grounds, all of which should be protected under law. The tribe is understandably concerned about water poisoning, land destruction, and all around disregard for the few miles of land they have left in the region. Between the Standing Rock Sioux Tribe, environmentalists, human rights activists, veterans, and a few notable celebrity progressives, the DAPL is incredibly opposed. It’s opposed so much that militarized police efforts to discourage, arrest, and harm protesters have cost the state and local police department over $3 million dollars thus far. From blasting water cannons at protestors in below freezing temperatures, to sicking dogs and deploying tear gas, construction of the DAPL has gone from controversial to full-on disgraceful. Protesters continued to stand bravely against the police on Thanksgiving — a holiday falsely advertising peaceful relations between the pilgrims and Native Americans many years ago — and have stressed that they will hold their ground, prompting even more violent police action. This leaves many American citizens and the world at large in silence.