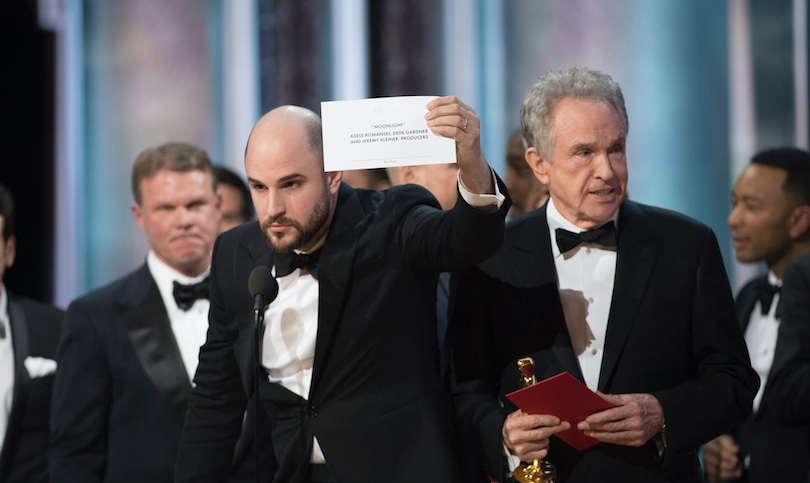 If you missed last night’s 89th Academy Awards ceremony, buckle up because we have all of the highlights for you!

Justin Timberlake opened the ceremony with his upbeat hit, “Can’t Stop the Feeling” and had the crowd on their feet dancing. Host, Jimmy Kimmel, took the stage and made a statement that only we as Americans can truly make America great again if we come together. He later tweeted at Trump, “u up?” poking fun at the fact that there were no tweets from the President of the United States dissing the Oscars.

Viola Davis took home an Oscar for her amazing role in Fences and gave a speech that will give you chills. Take a second and Google that speech. I’ll wait here. Amazing, right? This win made Davis the first black woman to ever win an Emmy, a Tony, and an Oscar for acting.

Jimmy Kimmel made red vines and junior mints rain from the sky joking, “Let’s see if those Spanx really work.” The second time the candy fluttered from the ceiling, the adorable Sunny Pawar of Lion screamed, “Lemonheads and Mike and Ikes” as he and Kimmel reenacted the famous scene from The Lion King. Giving food to reach people seems to be a trend ever since Ellen ordered pizza for the crowd in 2014. Throughout the event, Jimmy Kimmel and Matt Damon poked fun at each other. Damon tripped Kimmel while he was making his way through the audience and Kimmel mocked Damon’s performance in We Bought a Zoo.

98-year old Katherine Johnson, the real-life subject of Hidden Figures, received a standing ovation when she and the cast took the stage simply saying to the crowd, “Thank you.”

Foreign language film winner, Asghar Farhadi, chose not to attend out of respect for his country of Iran and others. Instead, a letter was read in his absence that denounces the “inhumane law that bans entry of immigrants to the US.”

Sting gave a chilling performance of “The Empty Chair” in dedication to James Foley, a journalist who was beheaded by ISIS in 2014. The song was an Oscar-nominated original song from Jim: The James Foley Story. At the end of the tear-jerking song, a picture of Foley was shown along with his quote, “If I don’t have the moral courage to challenge authority, we don’t have journalism.”

Jimmy Kimmel brought an unaware group of tourists who thought they were seeing an exhibit right into the Oscars ceremony! Engaged couple Gary and Vicky quickly stole the hearts of the crowd and those watching from home, and Denzel Washington even pretended to marry them.

But the craziest thing that happened by far was in the last 10 minutes of the ceremony when Warren Beatty and Faye Dunaway took the stage to announce 2017’s best picture. Given the wrong card, Warren Beatty with a confused look on his face announced La La Land as “Best Picture.” The cast and crew of the film took the stage to accept the award. Producer Jordan Horowitz interjected another team member’s speech and said, “There’s a mistake. Moonlight, you guys won best picture.” As the crowd fell silent not knowing what to think, he continued “This is not a joke. Moonlight has won best picture.” Many people did not even know this had happened until the next day because once they heard that La La Land had won, they turned off their TV’s and went to bed, as the ceremony had far exceeded its expected time.

Kimmel ended the show by saying “I blame myself for this… I knew I would screw this show up, I really did.”