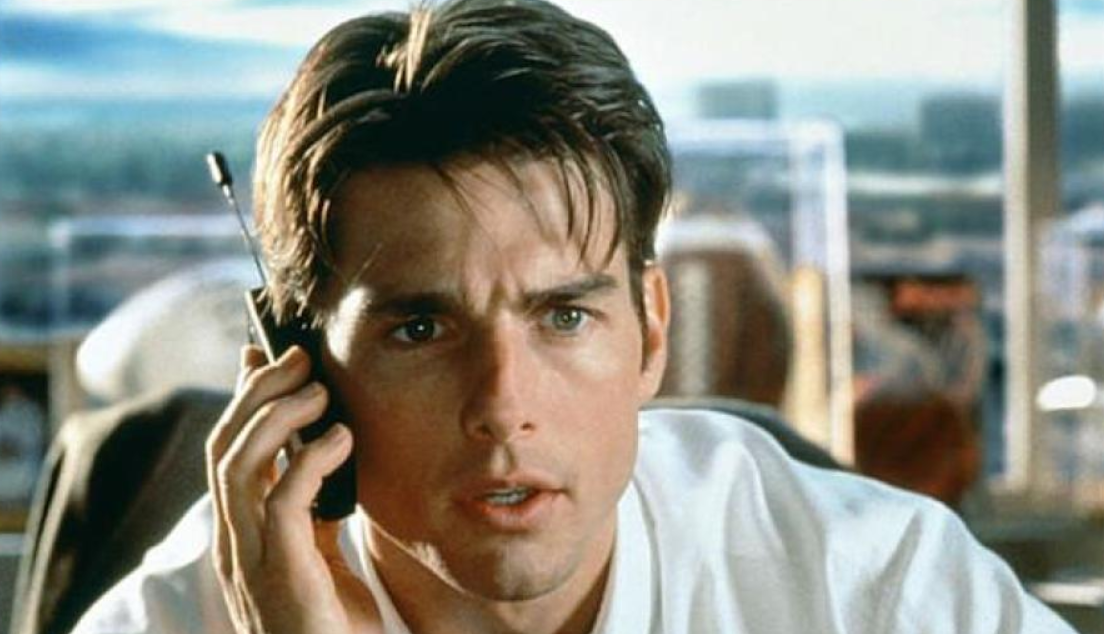 Jerry Maguire, played by the incredible Tom Cruise, is a sports agent on the brink of breakdown. He’s rich, successful, and has a sex life that would serve as the dictionary definition of “rampant.” He looks great, talks fast, and cares not one iota about the sports stars he represents. Maguire spends most of his time as a road warrior. He’s one of those dogged joggers you see in airports — racking up frequent flyer miles in pursuit of excellence. Yet, he’s not happy. He looks around and sees a business plunging toward cynicism. One night in a lonely hotel room, Maguire writes a memo titled “The Things We Think and Do Not Say: The Future of Our Business.” One of the things he thinks is that agents should be less concerned with money and more concerned about their clients. He gets a standing ovation in the office upon revealing it. However a few days later (when he’s fired), he understands why agents do not necessarily say the things they think.

Mr. Cruise could have been too big a star for this becomingly modest movie titled Jerry Maguire. With that said, director Cameron Crowe makes clever use of his leading man’s golden-boy aspect.  Maguire stages a grand exit with the company that built him. When he asks who’s walking out with him, only Dorothy (Renee Zellweger) — an accountant he’s met just once at the airport — stands up and says she believes in him. There a couple of moments in this film when you want to hug yourself with delight. Most of those moments involve the impeccable Ms. Zellweger, whose lovability is one of the key elements in a movie that starts out looking cynical and quickly becomes a heart-warmer. Mr. Crowe’s great talent helps to create a glow of intimacy around tentative young characters as they find themselves falling in love.

Dorothy not only agrees to follow Jerry because she believes in him, but she in fact loves the man. When Dorothy is seen on an airplane, (eavesdropping avidly as Jerry tells a boastful story), she seems resigned to living in another universe from men like this. The flight attendant emphasizes that point by closing the curtain between Dorothy’s rear cabin and Jerry’s first class up front.

Besides, she has a cute little son (Jonathan Lipnicki) and later explains she’s trying to raise a man — not find one. The basic appeal of Jerry Maguire is in fact watching Jerry become liberated from the rat race by discovering a richer new life in the real world. Dorothy has an outspoken sister played by the hilarious Bonnie Hunt, with her usual exuberance and ironic cheer. The sisters live together in a house where the living room seems to be semi-permanently filled by a self-help group for divorced women. The group spends virtually all of their time talking about men.

She is apprehensive when it comes to Jerry courting her sister, and makes it quite apparent. But the relationship between Jerry and Dorothy nonetheless proceeds. In very interesting ways, the duo nimbly navigates the initial boss-employee conflict. Jerry and Dorothy cautiously reveal the extent of their mutual physical attraction, consider the implications of an affair, and confront realities of life beyond the fun part. This comes into play particularly where Dorothy’s son is concerned.

The only client who doesn’t dump Maguire when the agency boots him out is Rod Tidwell (Cuba Gooding Jr). Tidwell is a wide receiver for Arizona. He resents the crappy waterbed commercials he gets put in, but is too loyal to leave. Rod’s recent performance and volatile attitude makes him a questionable commodity. Rod’s wife Marcee (Regina King) is her husband’s fiercest defender and biggest fan. Their marriage is a true love story. In contrast, we have Jerry’s failing engagement to the power-hungry Avery Bishop (Kelly Preston). Avery is soon out of the picture, and Dorothy begins to look less like an accountant and more like the most wonderful woman in the world.

Under the influence of his new feelings, Jerry helps Rod learn to play from the heart and not just from the mind/the checkbook. Tiptoeing through potentially maudlin territory, Crowe makes the kid stuff some of the very best in the picture. This occurs with the considerable help of the adorable Lipnicki. He quickly comes to adore the new man in his mother’s life. When Jerry and Dorothy hit a turning point in their relationship, the difference the resolution will make to the boy’s future become the substance of wrenching emotion.

Dating back to “Risky Business,” Cruise has specialized in playing slick operators with the ability to get what they want. The actor conveys this with his customary enthusiasm. It also stems from a self-deprecatory quality and humor that are both new and welcome. The film is often a delight — especially when Cruise and Zellweger are together. Cruise displays the earnestness of a man who wants to find greatness and happiness in an occupation where only success counts. She plays a woman who believes in this guy she loves, and reminds us that true love is about idealism. Crowe has written and directed a deft, funny, shamelessly upbeat romantic comedy. To top it all, it cultivated the finest performance of Cruise’s career to date.